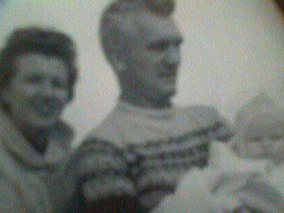 There are few animals in the kingdom as easy to sneak up on as as the terminally bored, tragically ossifying 90 year-old former livewire, now parked unwittingly and inevitably in one of life’s final Waiting Rooms; a senior apartment house of the ‘independent living’ variety. Because my mom is losing her footing and her faculties, it’s a smallish parlor trick, this illusion that I appear out of nowhere, a little ceremony that always brings a brief surfeit of joy as Aloha glances up from her newspaper or magazine, her previously expressionless face bursting into an astonished smile, my self-serving reward, my booster shot, much needed on those visits because the hours that follow are often difficult ones, wherein she will ask the same questions 15 times each, react with anger when I assure her for the 100th time that the handsome serviceman next to whom she is all aglow in the large sepia photo on the wall is indeed her husband of 49 years (now deceased for 20), and will refuse again to understand why her adult diapers are to be disposed of and not washed in the bathroom sink, a ritual that leaves the deliriously absorbent items crazily swollen with tap water and heavy as basketballs and hanging about the bathroom like the foul fruit of a nightmare. I’ve hefted one of these soaked things in one toweled hand and demanded of my mother “Can you imagine ever putting this on again?!” to which she always answers with a right-back-at-ya “Hell yeah!” Game, set, match.

At around 7pm on December 23rd, 2013, I surprised my mother in the usual way with a visit to her apartment house lobby. She was bent over a clipboard and applying her still pristine and grandiose signature to the twice-weekly-field-trip-by-van roster. Perfect, I thought, and crept up to within 8 or so feet of her. She will look up and I will have appeared, to her great happiness and surprise and mild consternation, out of nowhere.  When she did look up though, effecting a mild double-take when she realized she was being so stalked, her face remained slack, one of the most shocking things I’ve ever seen. Her eyes registered no flash of recognition, there was no beatific smile of relief and love and familiarity.  Nothing.  Her look just took me in. I was a simple unencumbered physical fact, the years and moments and heartaches and joys and mediocrities we’ve shared, our mass-conferring Higgs, gone in that instant.

She didn’t know who I was, hadn’t a clue. I was a dark-haired man standing and staring and grinning like an idiot. My posture and easy smile told her, apparently, that I was no danger to her, that at least I was a Friendly. It was as if a huge steamer trunk of journals and photographs, memories and fleeting thoughts and scraps of conversation, a human life’s worth of carelessly considered Moments, had been opened and its contents tipped into the middle of the deep sea.

My nose looks this way because in the summer of ’73 I was biking to the Boulder, Colorado Elks Club pool with my neighbor Cathy and my little brother Patrick, and at the corner of Quince Avenue and Broadway I attempted to cross without looking both ways. I’d peeked to my right and seen no threatening oncoming traffic, and I’d listened briefly for a car coming the other way and heard nothing. When I started across I was slammed by a southbound Toyota Corolla, breaking my left knee and flipping me handily onto the hood, my face then kissing the windshield with full concussive ardor. The freaked driver, a young man, slammed on his brakes, naturally, and I was comically launched 50 or so feet through the air in my beige swimsuit and t-shirt and hit the asphalt in a full body skid whose hot friction adhered my trunks to my right buttock, burning down through several layers of living skin and commingling the synthetic fabric with the nerves and blood vessels there. I remember the accident, as most remember such things, as a smooth-running film of a summer afternoon from which several celluloid feet are suddenly and silently removed, the disorientation of the narrative line a spontaneously nauseating and bewildering veil of magic dropped down to further confuse the mix of injury and horror. I was crossing the street on my newish Browning 10-speed and then with no mediating footage to explain the transition I was lying on the ground with Cathy’s face bobbing above and crying out Jeff! Jeff! in a tone I would never have previously imagined coming out of my wise-cracking co-conspirator in first kisses and vague proto-sexual experimentation by tween bedroom black light. The impact had turned my nose south by southwest, my once proud if unremarkable Robert Wing aquiline turned forever after to a small-scale, jarringly asymmetric Russet potato.

In the ambulance I heard a lady say ‘too bad, he’s a cute kid’ and vividly remember, even in the context of this emergency, feeling a full body blush of amazed gratification and excitement. At the hospital I found myself on a gurney while a roomful of professionals swirled and hollered without alarm. I was stunned and sick, rolling sideways and throwing up into a bedpan every three minutes. Where was I, what had happened, where were the people I knew, etc. I learned later my kid brother Patrick, who would some time later suffer his own traffic-related tragedy, had bike-sprinted the mile or so back to our house and burst in sobbing “I don’t have a brother any more!”

So finally, in the thick of the maelstrom and out of the clear blue my mom burst into the emergency center, whirling through the crowd like a movie actress, rushing smoothly to my side. I remember she pushed out of the crowd, grasped my arm, her looming face a portrait of crazy love and terror and concern and torment, and she yelled something and placed her hand on my bloodied hair and looked straight at me, locking eyes the way mothers do with their troubled or injured kids. Our eyes would now never lock that way again. How is this even possible? In the ~ 50 years of my memory my mother, Aloha Wing, has looked straight at me with various expressions of exasperation, amusement, love, anger, a little despair a couple times, across countless joking, berating, conversing mornings and afternoons and evenings of my life. Dawn, midday, dusk. Clean your room, Jeff. Mow the lawn, please, Jeff. Thank you for the nice card, honey. You’re not excused till you finish your dinner, Jeff; yes, even the green beans. Is your homework done? Empty the dishwasher, will you, Jeff? Jeffry, hang up your clothes. (sobbing on the phone) Jeff, Jeff…come over here, something’s happened to Patrick…

My omnipresence, my mom. Our story’s final shared paragraph fading after not very many years, not many at all. Where’d that lawn-mowing boss go? Where’s the Bridge player in slacks with her hair poofed up? All those afternoons? The crazy yoga period? My Cub Scout period? Her then-embarrassing and now endearing ineptitude as our Den Mother? Her lifelong teary laughter at my jibes and impressions?

This new woman wears my mother’s half-dozen rattling bracelets, sports her blue eyes, but the woman who stroked my bloody hair and looked straight into my eyes – she’s gone. Not temporarily. Tonight I met her replacement; a kind of benign stepmother. Where is the other one? River of Time plows heedlessly on and on and on, giving the fragile moments and hours, days, weeks, months and years a platinum sheen to dazzle the eyes, then drowns every last one of us.