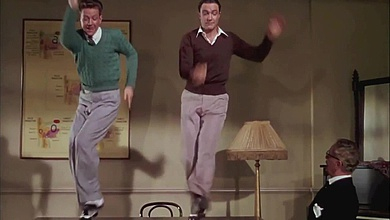 July 2, 1776 – A dozen or so kneesock enthusiasts gather in a large darkened room and bolt the door. These nascent Giants of Liberty, our Founding Fathers, are about to change the course of human events, put shoulders to the massive Hobbesian wheel of history, and in a fever of invention redraw the Rights of Man, actualize the Magna Carta and alter forevermore the intertwined destinies of all people everywhere. They will be performing these feats wearing inept doll’s hair wigs that appear to have been hastily glued together in a school for the blind, clunky buckled shoes bought for a song at Pilgrim Thrift, and those ass-hugging revolutionary trousers that so unnerved the French when old Ben Franklin was ambassador there. Despite these setbacks, the architects of our national sovereignty solemnly adopt the resolution to cleave the 13 American colonies from the British Empire. The momentous meeting concludes with the murmuring handshakes and hubbub that in those days passed for celebration. They realize there will surely be war now; a Revolutionary War, the birth pangs of a great nation. What they don’t know is that the English will sneak back in, conquering us anew via the maddened Revenge-Anglophilia of the mid-to-late 20th century; the Arthur Treacher Fish-and-Chips plague, Benny Hill’s unexpected classification as a ‘comic’, the lung-crushing Merchant-Ivory steamroller with its endless gauzy tape loop of Colin Firth in lace cuffs staring dolefully at his lipless, stick-figure girlfriend across an airless drawing room, and the mop-top tea party that swarms ashore to suckerpunch Elvis and slap around a stunned Connie Francis. Worst of all, our great nation will thereafter suffer at least one nattering anglophile per tormented office, he who regales you with his perfect ‘accent’ in the lunchroom every noontime until you want to crush your congealing Sloppy Joe against his bowl cut. Thanks, Founders.

Two days after the voice-vote Resolution to leave Mother England in a huff, a bunch of the Founding Guys in their Jiminy Cricket tailcoats get around to signing the hard copy, which has by now been promoted from Resolution to Declaration. But not before this fateful missive is dispatched. “The second day of July, 1776, will be the most memorable epoch in the history of America,” a wildly mistaken John Adams writes to his wife, Abigail. Thereafter his blood descendants will miss, by two days, every July 4th hullabaloo till the end of history.

September 14, 1814 – An American lawyer, blueblood and amateur poet named Frank rises with the dawn aboard the British flagship HMS Tonnant, dresses and heads topside. The frustrated British had a couple years before come roaring back across the pond to holler some more in a long nagging engagement later known as The War of 1812. The previous evening Frank had dined shipboard with the gracious British captain and crew and then watched helplessly from the deck as, through the long night, the British lobbed wave after wave of cannonade and corkscrewing rockets onto the beleaguered Ft. McHenry, the outpost a would-be guardian of the strategically important Baltimore Harbor. Frank had been trapped on the Tonnant during a friendly and pre-arranged prisoner exchange at whose conclusion the British declined to return him to shore – realizing the American was now aware of the disposition of His Majesty’s warships off Baltimore and might blab to his compatriots along the Maryland coast. He would have to wait until the conclusion of the battle to be put ashore with his freed colleague. Now after a night of deafening violence, morning on the water is utterly silent. The British have run out of ammo. The lawyer leans over the deck amidships and stares hard at the shoreline through a peaceably drifting scrim of smoke. After a minute or so the curtain of mist parts somewhat, and he can just make out the enormous American flag flapping serenely over the smoldering fort – a stubborn, striped, burned rag on a stick, waving like a sonofabitch; two fingers and the back of a hand raised to the British Empire, the victorious archer’s salute. Not as exclamatory a gesture as its colonial counterpart, the singular raised finger. But still. “The flag is still there!” he says aloud, pissing off the British sailor who has arrived to summon him for breakfast. Francis Scott Key heads belowdecks to join his weary hosts. On the way he stops in at his cabin and grabs his pencil.

July 4, 1986 – I’m prancing (there is no other way to describe it) across another shore, Leadbetter Beach, my pitiful little sunburned arms delicately aloft and flapping as I hippity hop and zig-zag through a fusillade of bottle rockets, Whistling Jupiters, cherry bombs, and roman candles. The good people of SB have come down to the water in their hundreds to ring in another national birthday with kegs and ordnance. According to a longstanding tradition, pits have been dug into the previously picturesque shoreline and the patriots are tossing fireworks at each other with beer-infused abandon. I watch with momentary interest as a pot-bellied guy in board shorts and a top hat proffers a colored cone of some kind, waving a font of sparks in front of him like a man watering a lawn, eyes closed. Leadbetter beach this day is a sun-drenched scene of mayhem, the stink of gunpowder commingling with that of hot dogs and spare ribs. The 4th of July. This is not the war-torn dystopia foreseen by the grousing post-Industrial naysayers, Wells and the other reflux Luddites. The world has changed, massively. The hopeful, bewigged guys in their embarrassing buckled shoes and gigolo pants were on to something, and the naive promises made in that room, the handwritten promises, have found their way, have found traction, through the succeeding centuries of war, privation, avarice, greed and hypocrisy – the human race’s unavoidable party mix.

More to the point, I’ve just met a girl. And isn’t that the way these things always wrap? Juud is visiting from Holland. I met her at the club the other night and we’re meeting again later in the day. She promised! And though I can’t know or even imagine it this July afternoon, we’ll fall, she’ll leave the country, and then she’ll return to the U.S. to stay. This young woman whose siblings all live within a mile of the family homestead on the Dutch channel coast, she’ll come back to the States and plant roots. In time she’ll bring me my Stella, my Sam, and through her dazzled eyes I’ll see things for the first time, by degrees I’ll begin to grasp how strange, exotic, musical, loudmouthed, and frankly batshit this country is. Gene Kelly and Donald O’Connor, for instance, America personified and already persons of interest to my burgeoning id, will be made actionable Ideas in the new pantheon Judie’s happy fascination conjures.

This afternoon I’ll flee the beach at fireworks apogee, the crossfire becoming worrisome. Later, Judie will actually show up at Dave and Susie’s condo on Bath St., to my mild surprise. Just like she said she would. I’ll spend that afternoon beginning my 27-year-and-counting freefall into the sunniest, most beautiful green eyes I will ever see. By that evening I’m still at it, as SB’s explosives experts put on their yearly show, launching colored fire over our own harbor in a display meant to mimic that of the assault on Ft. McHenry, the Bombs Bursting in Air that Frank Key was so anxious to note. Enormous blossoms of light periodically illuminate the scene, throwing into momentary, strobe-like relief the thronged, lucky recipients of all the largesse the guys had struggled to articulate on that carefully inscribed parchment those centuries ago, the vivid starbursts this evening accompanied by the quaint, concussive pops of this purely liturgical artillery barrage.

My new Dutch friend is there beside me. She sees all this stuff from a new window, and she adores what she sees here. In time she’ll throw light on everything I might otherwise never have apprehended with this clarity. The U.S. isn’t a police action or a drone strike. The U.S. is Georgie Gerschwin massaging a Steinway and glancing coyly over his shoulder – Someone to Waaatch Over Meeeee – the grand, straight unbrowed nose, the slight underbite. The U.S. is Gary Cooper, Fred Astaire, Sammy Davis, Jr., Henry Fonda, June Christy, Steve McQueen, Doris Day, Paul Robeson, Ann Miller, Dana Andrews. Gene Tierney, Jimmy Stewart collapsing atop a paper-strewn table and sliding to the floor, Cary Grant walking off into a snow-filled evening, Frank O’Hara jamming his hastily scribbled poetry into dresser drawers, Saul Bellow’s flight from Canada to Chicago to begin his pointillist, heart-seizing chronicle, and surely Steinbeck’s analog for the United States of America – lumbering, well-meaning, puppy-crushing Lenny. And at the center of the American Experiment, and of my patriotic id, a distinguished clique of tuxedoed figures are standing around a brilliantly underlit emerald swimming pool in the dead of a desert night, pinching martini glasses and tossing heads back congenially, in laughter, free hands in pockets, backs arched, knees bent slightly. A many-splendored thing.

This light-filled evening – July 4, 1986 – we’re just getting acquainted, Judie and I. Hoo boy. I’m seeing all of this for the first time! I’ve got a lot to learn about this place. But there is puh-lenty of time. Tonight I find I’m just staring at Judie as she stares, smiling like a fool, at the sky.