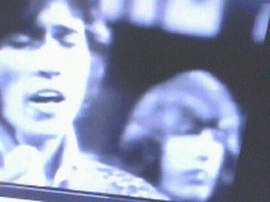 Mention the Bee Gees and time stops. Your suddenly chagrined companion will pause to reflect. The reverie is typically an unpleasant one; gold chains nestled in Barry Gibbs’ chest hair, three unsmiling grown men with their arms crossed, standing back to back in satin like Charlie’s Angels, lapels that could lift a fighter jet, and John Travolta strutting cockily down a Brooklyn street in white, jewel-crushing bellbottoms, aiming his dumb dimple and triumphalist double-wide yap at passerby. This is upsetting. The Bee Gees are not “Stayin’ Alive”. The Bee Gees are not “If I Can’t Have You”. These three doomed faux-Aussies are emphatically not “You Should Be Dancin’ (yet another bullet from the Bee Gees Nadir Period whose suffix-apostrophe illustrates how far they had fallen by the mid-seventies). Song titles that drop their final ‘g’ in a gambit for insouciance have always inspired contempt in me, as they should in you. Just sayin’. What the Bee Gees ARE is ‘How Can You Mend a Broken Heart?’, ‘Massachussetts’, and the jarringly unhip “I’ve Gotta Get a Message To You’, wherein a man on death row both pays penance and says goodbye to his love in a weirdly heartbreaking paean to loss and earthly regret. The brothers’ wordless start-and-stop harmonizing on that one should be enshrined in the Louvre. “Message” was a global radio hit; this in 1968, the year after the Youth Revolution’s high watermark had been codified by the tie-dyed nihilism and public screwing of the Summer of Love. The Brothers Gibb were the nerds at that party, eschewing shiny marching band regalia and the Billy Shears Mystery Tour at a time when psychedelia and stoned self-importance ruled.

They were often accused of riding on the coat tails of the Beatles, but their life-informed balladry was always of an entirely different species both in approach, and in the glorious femininity of its floral compositional style (he blathered unwisely). If there is a Beatles song like “Run To Me” I haven’t heard it, and it’s unlikely it would have occurred to the Fab Four (whom I adore) to pen a tune about a mine cave-in, as did the Bee Gees in the very un-sixties, starkly beautiful “New York Mining disaster, 1941”. The last gasp of the Old Bee Gees Order can be heard in the evanescent (and nowadays reflexively derided) “How Deep is Your Love”, also from the “Saturday Night Fever” soundtrack, but a gorgeous filigreed ghost of what was.

The brothers stumbled tragically into disco at the mercantile behest of producer Robert Stigwood, who was bankrolling a movie based on what turned out to be a largely invented New Yorker article about Brooklyn’s very real 70s underground dance culture. For that film, fellow Aussie and longtime producing partner Stigwood asked his boys for more of the ‘R & B’ the guys had featured haltingly on their recent “Main Course” album (listen to “Edge of the Universe” from that record. I beg thee, listen to “Baby As You Turn Away” as Barry tastefully explores, in a melodic swoon, his newfound falsetto. If you’ve a lick of sense, skip the risible “Jive Talkin'”, whose street-cred-seeking apostrophe foreshadows the coming sorrow). The boys obliged Stigwood, and were themselves as freaked as the rest of the world when the shoestring-budgeted little movie took off like a ballistic mirror ball.

The accompanying mayhem and largesse rang down a curtain, as often happens. Inevitably, disco fell out; lavishly and with much ado. The torch-carrying mob rose up to murder its emissaries and the Bee Gees were first in line to the gallows. They are hanging there still. Later, impish little brother Andy would come over to the states and make pop waves and grace the cover of Tiger Beat Magazine before sampling a little powdered sugar and taking it to heart, in fairly short order passing away in hospital at the age of 30, almost before his broken mother’s eyes. Bee Gee Maurice would die suddenly of a knotted intestine some years later and the grief would stun the surviving brothers into what would turn out to be an unbroken silence.

In a documentary made just before the very end, Barry and Robin, looking weathered and defeated, vow before the camera that they really want to get back into the studio, come in from the wilderness. The unintentionally elegiac documentary ends with Barry and a gaunt, bewigged Robin obliging the videographer with a couple roughly harmonized lines of old school, Pre Fall Bee Gees, looking at each other across the ages and smiling tiredly. Soon thereafter, dulcet-voiced twin Robin would slowly succumb to cancer, joining Maurice somewhere, it’s nice to think, though evidence is scant.

Now big brother Barry, 66 at this writing, is left to recollect. When the Brothers Gibb were wearing button-down shirts and blue jeans, singing songs like “To Love Somebody” and smiling unguardedly at the camera, Robin cupping his ear in performance to capture that inimitable harmony, they might not have guessed at the steamroller they would become, and how the later Disco Big Bang would poison their legacy. For some of us who know the boys by their gorgeous earlier efforts, the question still remains, and we can assume Barry asks it of himself every day on waking; how CAN you mend a broken heart?