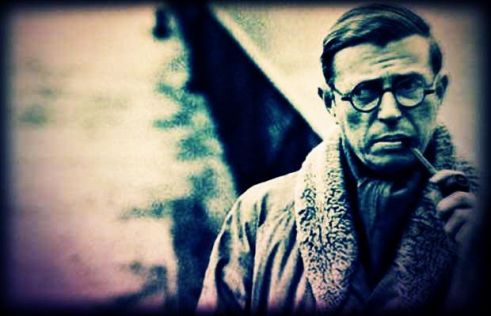 Despite the brief and lilting feeling of uplift you may experience seeing the title of this piece, this little essay without purpose is not going to exhort you to grasp life with both hands, bound sunnily into the Offered Moment, or rapturously twirl on an Alp. Note that the first word in the title is Carp and not Carpe. Carpe is a word popularized by the poet Horace around 23 BC in his Odes, a near-ancient collection of lyric poems of reportedly unsurpassed beauty. His suggestion was to carpe, or pluck or pick or seize, the day. You know, with joy or vigor or something. But the first word in the title above is actually Carp, without the suffixed ‘e’ that so makes the heart skip with its suggestion of joyous lunging. Carp means carp; a type of fish. In fact, it is the type of fish French philosopher Jean-Paul Sartre famously resembled. And so we have not ‘Seize the Day’, but ‘Carp Day’. You will not rush headlong into the waiting hours with your stubby little mitts already grasping at a promised epiphany. You will join me in contemplating the way five fused cubes of ice will suddenly decouple from the bottom of the Tom Collins glass you are stylishly tipping while you glance rakishly sideways at your beautiful date. Because you have a glass to your lips your smile will be more a leer; something Mannix might have tossed at Peggy, however involuntarily. As your leer reaches apogee the sparkling and asymmetric agglomeration of rounded, hugging ice cubes, which has waited all this empty eternity to arrive just here just now, will release from the sticky, electrically charged cohesion of fluid at the bottom of the Collins, slide like a cold heavy rock straight into your nerve-filled teeth and as your left incisor is jarred sharply loose from its greedy blood-lined socket you will scream briefly like a lady and the hostess, across the jostling room and poised on the shag-carpeted landing, will start with a gasp and in her vivid orange form-fitting cocktail mumu fall dreamily backward down the stairs with her newly purchased silver tray in a flinging, yelling confusion of limbs and canapes and an affronted spinal cord whose Newtonian adventure will stem, finally, the flow of chemical signals to her brain and stymie further attempts to don the mumu. 1971. Sartre has 9 years.