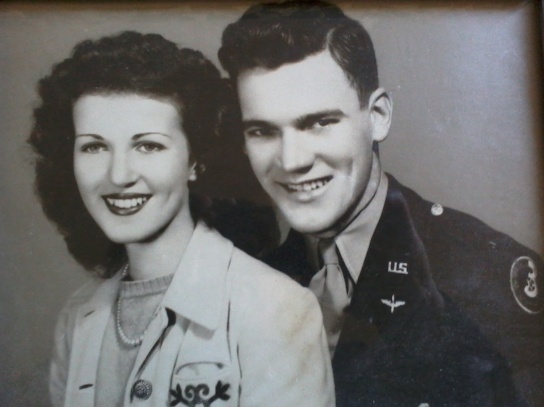 My mother’s name is Aloha, and that’s just the beginning. She’s had an interesting and peripatetic (there, I said it) life. Her travels and her times have produced a card, a ham, a bon vivant and a wiseass. She and my dad were a matched set that way. As a preteen she would routinely climb out of her bedroom window in the wee small hours (as Sinatra would’ve described them) and roam the various Army bases she called home. No Army-issue bedroom window could hold her. Her return would usually be in the company of a base MP (Military Police) most of whom knew her by name within a few months of her family having arrived for the new assignment.

In one familiar story she creeps out of her parents’ Army quarters late one night and slinks by moonlight to the base movie theater where the scandalous Gable/Lombard film ‘No Man of her Own’ is playing. 20 minutes into the movie the MP’s familiar flashlight beam plays down the darkened aisle beside her. She looks up to see a resigned-looking white-helmeted base policeman standing beside her  “C’mon, Aloha,” he reportedly sighs. “Let’s get you home.”

Aloha was born in Hawaii but is not Hawaiian. She was born at Schofield Barracks, the Army post that 17 years later would be laid waste by nervous Japanese pilots following the ill-advised orders that would eventually unplug their empire. Her father was an Army Colonel who had always adored Hawaii from afar and had finally secured his dream posting. In the full flush of his island fever, he and my probably less enthusiastic grandmother nearly named my mother after the last sovereign queen of Hawaii; Liliʻuokalani, which is unfortunately pronounced pretty much the way it’s spelled. In that case today my mother would be going by ‘Lili’, one hopes. It was a close call.

By 1942 she was a volunteer for the war effort in Florida, pushing crudely built model planes around a tabletop aerial map with a long stick, the better to differentiate, with the civil air authorities’ radioed help, the mean planes from the friendly ones in the air around the eastern seaboard. Cameras in space were still an Arthur Clarke daydream. She met my dad that year at a servicemen’s dance and the game was afoot.

By 1969 she was an Air Force Wife. We lived on Wheelus AFB, just outside Tripoli, Libya; my father, my mother, my little brother, my big sister, and me. Quarters 4G, three blocks from the Mediterranean. We were there for all of a year and a half before Colonel Gadaffi rudely moved his belongings into the Royal Palace during one of kindly King Idris’ clueless junkets abroad. Shortly thereafter we were ordered to leave the country. Aloha managed to make a few waves in the time between our arrival at Wheelus and our gunpoint-inspired departure.

She spent much of 1969 with a similarly meddlesome gal pal, skulking around the foliage of the Base Commander’s expansive Air Force-issue home on a bluff overlooking the sea, snapping Polaroids of the Black Panthers sign that adorned his quarters’ front lawn, hoping to get him in hot water with the Air Force. They of course looked the other way despite his tacit endorsement of what was then considered a domestic U.S. terrorist group (but was in fact a strategically unconventional civil rights advocacy group whose business plan sometimes ran afoul of an entrenched, racially insensitive Establishment. Ahem). The commander, Chappie James, was already near-legendary and would soon enough be made the U.S.’s first black Four-Star General.  Some of my parents’ best friends were African-American Air Force peeps, but James wasn’t one of them. He fell out of favor with Aloha when he acceded to Libyan demands to imprison my mom’s neighbor.

General James, then head of NORAD, did famously finesse an orderly retreat from Wheelus AFB, an outpost of the Strategic Air Command. Chappie James foiled through negotiation what was meant by Gadaffi to be an embarrassing rout for the Americans and their base. Aloha was having none of it, though. As had many of the base’s residents, Aloha had objected to  James’ treatment of her neighbor Genevieve, to whose house arrest he had grudgingly agreed in the wake of her husband’s botched attempt to spirit a Jewish friend out of the country in a Tuba crate bound for Malta; a plot foiled on the tarmac of the Tripoli airport. Genevieve’s husband, Dan deCarlo, was my grade school principal on the base.

The newly installed Gadaffi regime—invigorated by the success of their recent coup—had been extremely displeased with his attempted rescue and in the placating atmosphere of the time our Base Commander had agreed to the new Libyan government’s terms of reprisal; orders to sequester the woman (a soft-spoken, unbowed French academic), strip her of all personal belongings, and send her out of the country to join her exiled husband in Japan following several months of housebound questioning.

Aloha and Stephanie Take the Wheel

Aloha and her mischief-making pal, when not busy trying to tattle on the Commander’s politically-charged lawn signage, contrived to smuggle Genevieve’s entire household out of Libya, incrementally, piece by piece. The success of the Aloha and Stephanie Moving Company reportedly involved some shameless flirting with the young, bashful and easily distracted Libyan guards. These stunts typify Aloha’s middle age. Still later she would become an avid scotch-and-water Bridge partner to my dad,  a gold-medal-festooned Senior Olympian in swimming, a Benson and Hedges-hoisting hostess to her dear friends and neighbors, all of whom have themselves left the stage. These various states of Aloha occupy her like the cozily concentric shells of a Russian nesting doll.

Judy Garland and Mussolini and Aloha

Aloha was very fortunate to have entered the world (Stage Left) in the midst of the sort of colorful epoch that favors the high-spirited. It was a time of intense feeling and color. Judy Garland and Mussolini were a couple of the players, for instance. It’s true that much of the intense color was ordnance blossoming brilliantly in the saddened skies over torn-up Pacific islands and ruined, smoldering European capitals. But these terrible conflagrations seize and enlarge the bruised human heart. It was, as a great Victorian artist with a poorly executed comb-over once remarked of another era, both the best and worst of times.

Aloha is 89 now. Still possessed of her dark hair, her teeth and her attitude. She can’t pass the full length mirror in her apartment without stopping to strike a Dorothy Lamour ‘ready for my closeup’ pose; one hand on her hip, the other perched uncertainly atop her 89-year-old head. It happens without fail. Her humor is mine (antiquated and often indecipherable) and there are times we’ve had each other laughing so hard the Grim Reaper stirs, puts down his newspaper and takes notice.

I always make it a point to enter Aloha’s apartment with a wry comment at hand. When your aged, self-deprecating mom answers the door with one shoe on and one foot bare, the comic possibilities announce themselves and one would be a fool not to pounce. She happily jumps aboard, glancing down and guffawing, then breaking into helpless wheezing as I enter a soliloquy on the dignities of old age. If she could be summed up with a gesture it would be a bemused shrug. This endears her to some of her neighbors at the retirement village (fellow travelers through a wild and world-renewing fire), and others it bewilders and frightens.

There are moments I’ve thought my mother was going to laugh herself to death, times she couldn’t catch her breath as we both leaned into each other in helpless hilarity. When your physical machinery is 90 years old, raucous laughter is necessarily a more fragile operation. I expressed this concern once. We’d really got each other going, she was crying with laughter. Finally, she couldn’t breathe, couldn’t catch her breath. She raised her hand to her chest, trying to draw air. I panicked.  “Hey! Hey! HEY!! MOM!! MOM!! MOM!!”

“What,” she coughed, waving me away.

“I thought you were going to leave us there for a minute!” I put my arm across her diminished little shoulder. She wiped her eyes and sighed through a rattling chuckle.

“Wouldn’t have been so bad,” she said.

4 thoughts on “The Various States of Aloha”